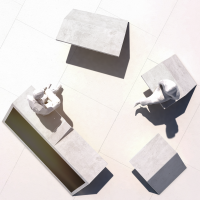 The University Center for Energy Efficient Buildings of CTU has developed a Levitee design set of concrete urban furniture with the possibility of installing intelligent technologies. The new product will be presented to the public on June 5-6, 2019 at the Urbis Smart City Fair in Brno, where it will compete for the Gold Medal awarded by an international expert committee to the best displayed products.

The furniture was designed as a set consisting of a cantilever bench and accessories, which should bring wide variability when placed in a public space. Its solution follows on from the development already started in 2015 and is based on research carried out among manufacturers and end users.

"Our team was present during the development of the prototype of the first smart bench in the Czech Republic called "CapaSitty", which was also presented at the world exhibition EXPO 2015 in Milan, Italy," says the head of the Tomáš Vlachproject. After it ended, in the country with smart benches, the bag was torn, figuratively speaking. Gradually, however, the rather negative opinion of the public began to prevail.

Based on communication with manufacturers and users, the main reasons were determined to be the high purchase price, insufficient variability due to the limited orientation of the photovoltaic panel, inappropriate and distracting appearance. "That's why our team decided to go ahead and develop a new bench free from previous solutions, which could function and invite rest even as an ordinary bench without the installation of intelligent technologies, but at the same time it would allow for their easy and variable assembly and would not have a disruptive effect on its surroundings." adds Tomáš Vlach.

In addition to a comfortable short-term rest, the "Levitee" bench can charge the user's phone via a USB connector, provide free Wi-Fi connection for mobile devices, and also measure air quality using various sensors supplied according to the end customer's wishes, so it fits perfectly into the Smart City concept.

Thanks to their easy accessibility and placement in integrated boxes, intelligent technologies can be added or removed according to the customer's needs, even after the furniture has been placed in the field. In addition, they can run without being connected to the electrical network, because the bench, with limited functionality, is sufficient with its own photovoltaic panel and battery, where it stores energy in reserve to cover operational needs in times when the sun is not shining. In the case of mounting more sensors and other elements with a higher consumption of electricity, the bench can be connected to the network to work with the panel as a hybrid system.

During the development, the emphasis was placed on a design that should be interesting and at the same time not draw attention to itself blatantly, because the goal of the creators is for the bench to blend in with the surroundings. Therefore, the CTU UCEEB team prepared an original form and mixture of high-quality concrete for the production of the presented prototype. Instead of classic steel reinforcements, they used technical textiles made of carbon fibers saturated with a polymer matrix. The base part of the bench, located below the ground surface, was designed with a significant proportion of recycled material.

The original shaping of the carbon reinforcements was tested in a laboratory and is protected by copyright, just like the shape of the bench. These stronger and more durable materials are not subject to corrosion and the thickness of the concrete can be considerably less. Thanks to the material and the original shape, the bench is much lighter and therefore easier to transport than if it were made of ordinary concrete with traditional reinforcement.

In addition to the Urbis fair, the bench should also be seen in several places in Prague from this year, where three pieces will be installed as part of the Technological Transfer for Smart Prague project (supported by the Prague Growth Pole Operational Program).