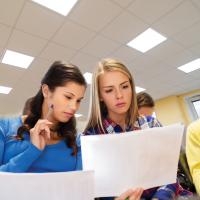 Scientists from the University Center for Energy-Efficient Buildings of the Czech Technical University in Prague, in cooperation with experts from the company Spectrasol, have developed a new type of light fixtures whose color spectrum is very close to natural sunlight. Its usefulness is confirmed by the conclusions of world-unique studies conducted at the Na Pražačka Gymnasium in Prague and in cooperation with the National Institute of Mental Health also at the TGM Senior Home in Beroun.

Studies have confirmed the positive effect of pro-cognitive and biodynamic light on the students of the Na Pražačka grammar school as well as the seniors and staff at the TGM Seniors' Home in Beroun, who experienced an improvement in their mood, alertness, work performance, ability to concentrate and learn new things, and in the long term also sleep quality and overall health.

The first project was the placement of new lighting fixtures in the classrooms of the Na Pražačka Gymnasium in Prague, where pro-cognitive lighting was installed with a balanced representation of all wavelengths in the spectrum in the range of 450-650 nm and with an emphasis in particular on the biologically activating area of the blue and cyan part of the spectrum, similar to that in daylight.

Compared to conventional lighting, a scientific study after several years of data collection confirmed that Spectrasol technology significantly improves decision-making speed, concentration and short-term memory function in students during the winter months. "The overall results of the students and the better performance in the cognitive tests confirmed that we are on the right track. When we compare the report card grades before and after the installation of the lighting, we find a statistically significant improvement in the average grades", says Dr. Lenka Maierová, the head of the scientific team from the University Center for Energy Efficient Buildings of CTU, which conducted the experimental research.

The first study was followed in a short time by the second in the TGM Seniors' Home in Beroun, where so-called biodynamic lighting fixtures were placed. While daytime lighting with its spectrum resembled natural sunlight as much as possible, thereby supporting cognitive performance and good mood, in the evening the lighting gradually transitioned to warm tones of a relaxing nature, with a reduced representation of the stimulating blue component of the spectrum. For the necessary night lighting, a system was created completely with the absence of blue light, which will allow seniors to sleep peacefully and undisturbed while maintaining the possibility of visual orientation when moving around the rooms.

A total of 19 clients of the TGM Nursing Home in Beroun and 13 staff volunteers participated in the research. For eleven clients in the test group, biodynamic lighting was applied in their rooms, for eight clients in the control group the change of lighting was only simulated and the lighting parameters remained original. An objective assessment of the effects of lighting was carried out by the National Institute of Mental Health in Klecany.

"Clients from rooms with biodynamic lighting also improved in cognitive performance measured by the Addenbrooke's Cognitive Test after ten weeks, and this level of improvement was positively correlated with increased melatonin amplitude," explained the results of the study doc. Zdeňka Bendová from the National Institute of Mental Health in Klecany and the Faculty of Natural Sciences of Charles University, another member of the interdisciplinary team that evaluated the effect of light on the elderly.

The lighting was similarly evaluated by the clients of the home themselves, who, according to their words, feel better under the new lighting. "Seniors in the tested group after replacing the lighting themselves described an improvement in sleep, mood and safety of movement at night, which also confirms the positive contribution of biodynamic lighting to their quality of life," mentioned another, no less important result after the installation of lighting, Mgr. Ondřej Šimon, MPA, director of the TGM Senior Home in Beroun.