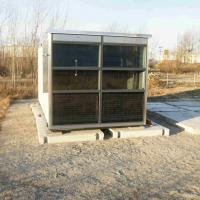 Since 2015, the University Center for Energy-Efficient Buildings of the Czech Technical University, together with its industrial partner SKANSKA, a.s., has been researching the LOP (now Wieden, s.r.o.) area of the possibilities of integrating energy elements into facade modules of light envelopes (LOP).?

In the energetically active LOP project, the goal was to integrate a hybrid photovoltaic-thermal (FVT) collector and an optically selective reflective grid. In the ongoing autonomous facade module project, we focused on the use of a Peltier cooler in combination with photovoltaics integrated into the LOP together with battery storage.

The hybrid photovoltaic-thermal (FVT) collector serves for the local combined production of electricity and heat. At the same time, it brings about 35% higher savings than in the case of a combination of existing technologies (photothermal collectors, photovoltaic modules).

The optically selective reflective grid serves to ensure diffuse lighting, solar gains in the winter and reflection of solar radiation in the summer to eliminate the thermal load of the interior. Overall, its application leads to a reduction of energy consumption for heating and cooling by up to 25%, depending on the percentage of grid glazing.

For the autonomous facade module, based on CFD simulation, we designed and experimentally tested various designs of the Peltier cooler, and at the same time we designed a facade photovoltaic system with a flat battery to drive the cooler, fans, blinds and interior lighting.

An autonomous facade module with prefabricated integration of the mentioned elements has the potential to increase the speed of construction, increase the autonomy of the state of the internal environment on the central technical system and thus improve user comfort in administrative buildings. The result of both projects are prototypes of a prefabricated light enclosure in the size of approx. 3 x 3 m equipped with energy elements, which are tested on the test cell of the Czech Technical University UCEEB built for the purpose of long-term testing and monitoring of the functionality of the concepts. Both concepts are industrially protected.

Environmental concept of the building